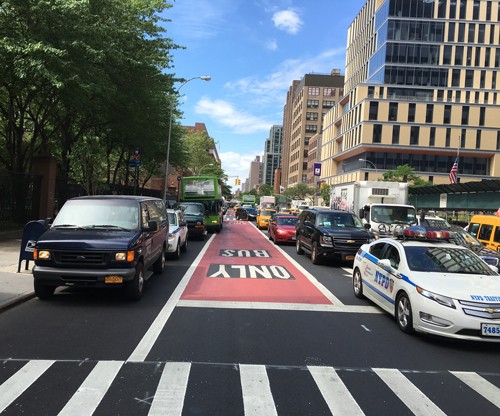 Many cities in the U.S. are expanding their portfolios of bicycle lanes and bus-only lanes. Creating bus lanes helps to alleviate congestion in heavily travelled areas by the decreasing the number of cars traveling in those spaces, especially during peak times. In fact, worldwide, many countries are implementing bus rapid transit (BRT) systems, which can reduce travel time and commuter impact by millions of hours.

Bike lanes reduce the rate of injury to cyclists by 50%. Clearly marked bike lanes help motorists to more accurately gauge the space to allow for cyclist (not doing so accurately causes accidents, to either cyclist or motorist swerving to over-correct, accordingly to a study in three cities in Texas.)

Let’s break this down a bit further with three basic concepts that transportation professionals should keep in mind when planning for these dedicated rights-of-way.

By denying access to the road users who take up the most space per person (that’s you, drivers), dedicated lanes can actually provide transportation to more people in less time. It’s not difficult to imagine how a bus-only lane with frequent, full buses is going to move a lot more people than a congested lane of traffic. Bike lanes, by virtue of how narrow they are, provide a lot of throughput in exchange for relatively little road space. Furthermore, the improvement in travel times for bus riders or bicyclists makes those options more attractive, which can help get drivers off the road and decrease congestion in other parts of the road network.

That’s a lot of benefit, especially when you consider that:

Dedicated bike and bus lanes are not major capital investments. Often, they can be installed with nothing more than a coat of Color-Safe™ durable pavement marking material, vibrant, colorfast road markings, and a little signage. In the case of bike lanes, they can often be installed without even reducing the number of lanes of vehicular traffic.

However, Departments of Transportation often treat new bus and bicycle infrastructure like major projects, with all the red tape that goes with. Some agencies have gotten around this by treating the installation of dedicated lanes as routine maintenance rather than new construction. Assigning the project to DPW may help state and municipal governments find the needed funding. This workaround, or other means of streamlining the pre-construction process, may have the potential to accelerate the buildout of dedicated networks of bike and bus lanes.

And that’s important, because:

A central goal of transportation planning is to maximize the number of users who will benefit from investments in infrastructure. A single bike lane or rapid bus route—made possible by a dedicated lane—does very little to advance this goal, because most destinations are still going to be out of reach for most users. However, the value of a bike lane grows exponentially with each connection to another bike lane. The value of a dedicated bus lane, meanwhile, is a function of the number of routes it serves and the connections to other routes. (Note the BRT systems mentioned above being implemented around the world!)

A famous example in the cycling world is Portland, Oregon, where an entire bike lane system crisscrosses the whole city and cycling rates are among the highest in the country.

There is no question about the safety benefits of bicycle and bus lanes, and adding the efficiency of moving traffic, and of the “green” or sustainability factor, municipal and government transportation need to consider the most economical means of funding dedicated lanes. Color-Safe MMA is a cost-effective pavement marking material. Take a look at our Color-Safe portfolio and see the many solutions our experts in transportation and safety at Transpo Industries have installed for towns, cities, and airfields. Download it now and see if your solution is one just click away.

More in this category: « Transpo® Industries at Savannah Hilton Head International Airport Why Choose Color-Safe® MMA over Thermoplastic? »
back to top